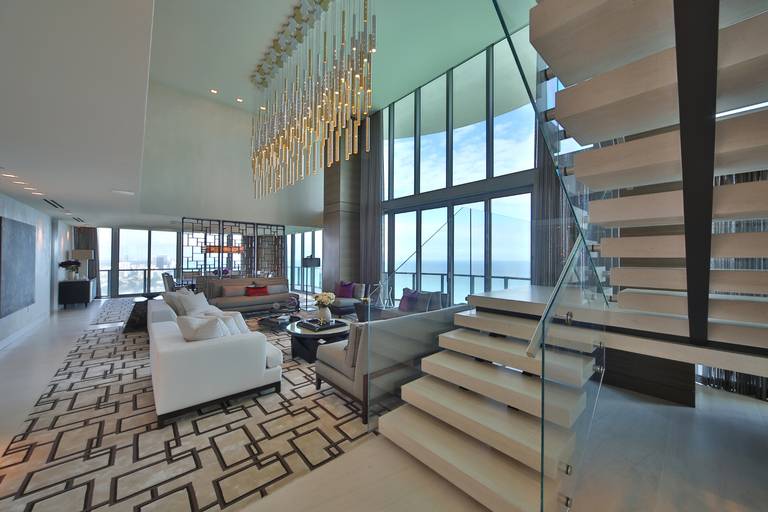 In an effort to lure flush buyers, Regalia Residences in Sunny Isles Beach is throwing in an Iguana Yacht with its $30 million penthouse. Those who prefer land-cruising can go for the five-bedroom, $22 million unit on the third floor that comes with a Lamborghini SUV.

As single-family inventory shrinks, Regalia listing agent Mark Pordes said he hopes to draw buyers’ attention with luxury vehicles that complement a high-end lifestyle. He is partnering with the North Miami Beach-based dealership Prestige Imports to offer the SUV and yacht.

The move follows a similar offer from Aston Martin Residences. The Downtown Miami tower is offering the 2021 Aston Martin DBX SUV as a bonus to its condo buyers.

“It gives the upscale buyer a lifestyle incentive,” Pordes said. “It’s not a secret that the single-family home market has been flying off the shelf. Because our units are large, we feel like the units are appealing.”

Gilberto Bomeny, one of the developers of Regalia Residences and director of development firm Regalia Beach Developers LLC, filed for Chapter 11 bankruptcy earlier this year. Under an agreement with lender Atalaya Capital Management, Regalia has until August 2021 to sell at least one of the units. Both are developer-owned units.

The 9,193-square-foot penthouse — a triplex — starts on the 43rd floor. It has five bedrooms, six bathrooms, two half baths, a spa, rooftop pool, wine cellar and movie theater.

Pordes said he has spoken to potential buyers coming from Los Angeles, New York, and South Florida. All are looking to buy a primary residence in Miami.

Built in 2014, the beachfront, 46-story tower has 39 units. Amenities include a pool, gym, and spa. Coconut Grove-based Arquitectonica designed the building.

The tower is a three-minute drive from the gated, single-family home community of Golden Beach — where houses start above a million — the Porsche Design Tower and Residences Armani Casa.

Bomeny also co-developed One Thousand Museum and is planning a mixed-use project in downtown at the site of the current Holiday Inn across the street from Bayside. Bomeny owns several hotels and retail centers in his native Brazil.

Pordes, the owner and CEO of the Aventura-based sales and marketing firm Pordes Residential, and his vice president of sales, Adam Kaufman, represent the Regalia listings.